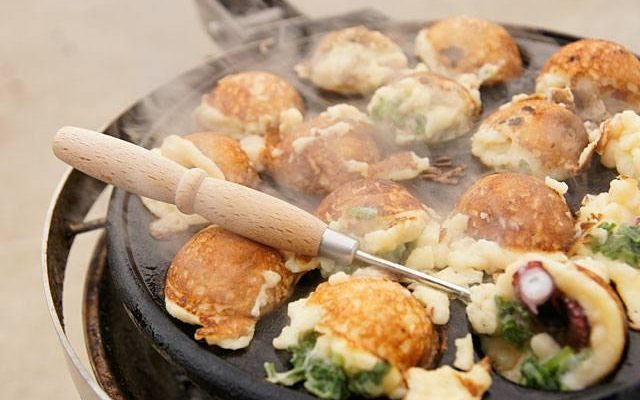 Looking around your surroundings and seeing what’s new really did us good this one time. While on our way to SM Megamall coming from my Pru Life UK office a few blocks away, we had to pass through St. Francis Square. And along its entrance facing Megamall, we noticed this peculiar takoyaki stall!

Enter Ryoma Takoyaki Station. If it was just any other takoyaki stand, we’d probably just ignore it. But since its here in my blog, it isn’t- well, what caught our eye was this Japanese dad-bro making the takoyaki balls himself! This gave us the notion it might be different vs. our local takoyaki vendors- different in a sense that it’s more authentic due to the owner/cook being a real man from Japan. Wait, was that being racist? I think it is, but in a good way! Lol. Helping him operate the stand were two nice ladies.

We ordered four pieces first to try it out (two for me, two for Lei). One piece costs 13 pesos but there’s a minimum order of three pieces. We ordered another four since we enjoyed it so much, and then washed it down it with a 15 peso per cup gulaman juice they also sell. To be honest, their takoyaki balls don’t really have a wow factor to them, but what I can say is that they’re on the better end of the spectrum. They’re just about the same size as the others, but it is worth noting that they put legit tako (octopus) in there, and definitely more than our local stalls. The sauce is smooth and creamy, not too salty, and the mayonnaise is legit Japanese mayo! So all in all, it’s a good 13 peso per piece treat.

Some may think that writing about a small stall like them might be petty for some, but we really did enjoy their takoyaki. To the extent that we eat there every time we pass by the area! I think it’s been four times now since this post? And what I enjoy, I write about here at The Foodie Geek no matter how small-time!

After eating, we were able to exchange a few words (in both English and Japanese) with the owner, Mr. Funatsu. He’s very humble and accommodating like a true-blue Nippon man. He said he doesn’t speak much English but can understand it, and apologized. I replied with “大丈夫 (daijoubu)!” which means “Don’t worry about it!” and he smiled and laughed a bit. Not sure if he laughed because I could speak Japanese, or maybe I just pronounced it wrong. Hoping for the former! Haha. Also, fun fact: Ryoma is the name of his son!

After the pleasantries, we took a photo with him. And looking back at the photo, I was surprised that me, Lei and Mr. Funatsu looked so much alike that he could be our dad! Like I said in my Facebook post, he’s our father from another grandmother. Lol! Anyway, do try out Ryoma Takoyaki when you’re ni Ortigas! They’re also open for franchise! You can email him directly at the address I provided at the top of this article.

You can also add katuobusi to your takoyaki for an additional 10php!

Note: Ambiance was not included in the rating because this is a food stall.