Kara no Kyoukai: The Garden of Sinners Review

It’s probably best I tell you right away that Kara no Kyoukai: The Garden of Sinners is one of my all-time favorites, also garnering a rare 10/10 rating among my many reviews! This is one of those elegant shows that pack a mega-punch in all the important aspects where animation, story, music and voices are top-notch!

The anime falls under Type-moon’s Nasuverse (Also the same universe of Tsukihime and Fate/Stay Night) so the lore and feel of their worlds are similar in a sense. Kara no Kyoukai is a series of movies, not episodes, all of which should be watched sequentially even though they aren’t chronological in order. 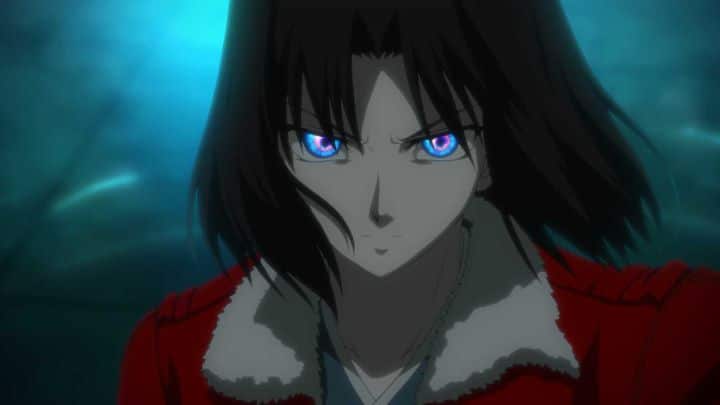 The first movie introduces Ryougi Shiki, who possess a rather special ability called the Chokushi no Magan, or Mystic Eyes of Death Perception where it allows the user to see the “death” of everything in existence as lines. A cut along any line will bifurcate the object no matter the sharpness of the cutting tool used, and a stab at the point destroys the object’s origin, causing instant death. This is due to her 2-year comma after an accident, where her consciousness was able to understand death after dwelling in it for so long. The ‘eyes’ are portrayed by having a rainbow-like color when activated.

Next up is Mikiya Kokuto, a high school friend of Shiki and one who shares a deep affection for her. Despite Shiki’s being cold and unattending, Kokuto still sees her as someone who needs taking care of. In the present timeline, both Shiki and Kokuto work for Aozaki Touko: a puppet-maker who owns a design agency that sells architecture and craftsmanship. Though behind the facade, she is actually a powerful magus, and her agency occasionally takes on supernatural cases. These cases will set the stage for the story’s progression.

On the subject of magic and sorcery, how the Nasuverse explains things is quite interesting as it takes on a different approach rather than how things usually are in fantasy anime. As Kinoko Nasu, the author, tells it: a human must possess a magic circuit for him to qualify as a magus. The circuit is explained as:

“A pseudo-nervous system that spreads itself through the human body. Originally, its function was to just replenish a person’s life force whenever the amount of Od inside his body reaches zero, but humans learned how to control it and use it to perform mysteries. That which connects the material world to the astral plane, if prana is the force that actualize the rules of a Thaumaturgical Theory’s system, then the Magic Circuits are the pipelines that converts prana and transmit that energy from the magus to the system.”

Totally confusing, right? It is- but no worries, you’ll come to understand their peculiar world as you dive into the series, movies, games, novels and manga of the Nasuverse- that is if you can give both time and effort on it. What makes it interesting is they incorporate a lot of concepts and theories from various cultures and beliefs around the world to create a unique yet logically sound reality of their own. 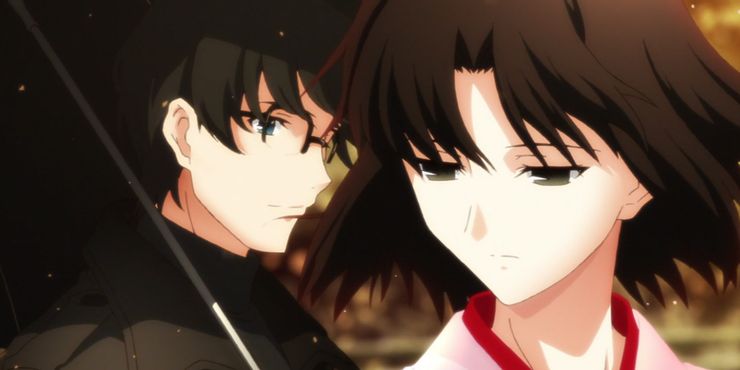 Chapter 1 – Overlooking the Scenery
Shiki, Kokuto and Touko are introduced but aren’t given much character background yet. There seems to be an increasing number of high school girls committing suicide in the deserted Fujo Buildings, so Shiki visits the area. She then stumbles upon the body of the newest victim, though her attention was drawn to several ghostly figures floating above the building.

Chapter 2 – Murder Study (Part 1)
Kokuto meets Shiki for the first time. This movie partially unfolds the background between Kokuto and Shiki when they were in high school, as well as how things got to where they were in the present story.

Chapter 3 – Remaining Sense of Pain
“A teenage girl, Fujino Asagami, is being raped by a street gang in an abandoned bar. During one night, Mikiya finds a confused Fujino crouched in an alley and noticing she is suffering from pain in her abdomen. Mikiya accompanies her to his apartment where she falls asleep. In the next morning, Mikiya notices Fujino is gone and at the same time, the news report a murder scene in an abandoned underground bar where the victims’ corpses were found with their limbs torn off.” -Wikipedia

Chapter 4 – The Hollow Shrine
Ryougi Shiki wakes up from her coma two years after the incident in chapter 2, and finds that everything she sees has lines and cracks. This is also where she meets Touko for the first time.

Chapter 6 – Oblivion Recorder
Ryougi Shiki is assigned to Mikiya Azaka’s school with orders from Touko to investigate the reports of fairies stealing the students’ memories and a suspicious suicide.

Chapter 7 – Murder Study (Part 2)
The latest in the timeline, and the mystery surrounding chapter 2 from four years ago is put to a close.

Besides Kinoko Nasu’s genius of coming up with the original art and concept, Ufotable’s animation and Yuki Kajiura’s music are to be given equal praise. The small-time and unknown animation studio set a new standard for stunning HD anime in its time, and the renowned composer produces spine-tingling music and songs that are on a level of their own. Truly works of art not to be taken lightly!

After all is said and done, it’s obvious what I want you to do next- put it on your list!