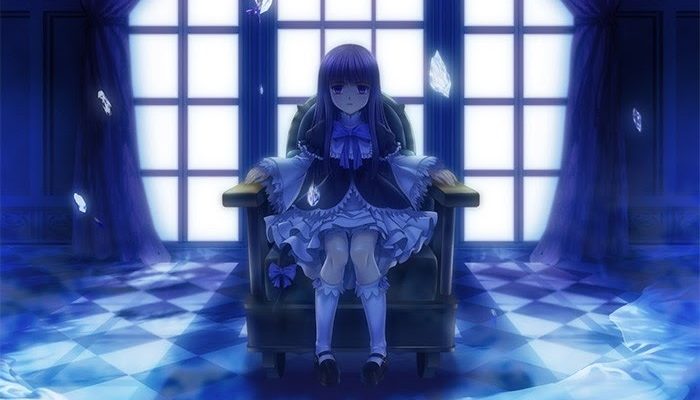 It’s been awhile since the last anime release of Higurashi: When They Cry (and I doubt there will be any soon), so to keep fans like myself from going crazy over such withdrawal symptoms, here are some rare Higurashi stuff I’ve found online- specifically the English translations of the poems presented at the beginning of each chapter in the original visual novel. I was never able to play the VN, but the anime really stuck to me.

I bet these poems would take those who know the series to a nostalgic high. But if you don’t know Higurashi yet, maybe these works of literature might interest you in watching as they are the precursors that describe every arc’s situation via the point of view of Frederica Bernkastel– a neutral secret character in the series.

So who is she? If anything, she looks like an older Furude Rika and is only briefly seen at the last episode of season 2. You may also have seen her in Umineko No Naku Koro Ni (Umineko: When They  Cry) as the Witch of Miracles, but her existence begins in Higurashi’s Atonement Chapter when Rika loses herself to despair, hopelessness and lost of interest in overcoming her and her friends’ tragic fate. Wikia states: “It has been suggested she and Rika are either the same person, or she is a compilation of all the past Rikas who died. In the sound novels, Frederica said “Eventually, she (Rika) started giving up, and lost interest in those worlds. That’s how I was born…” If this is true, it also relates to Bernkastel of Umineko.

This would directly explain her declaration of being a separate person from Rika, Bernkastel’s empty eyes (a.k.a. loss of humanity, she has no glint or life in her eyes), and her ironic title as the “Witch of Miracles”. Bernkastel says that she is named the “Witch of Miracles” because she is the only one who knows that miracles cannot occur out of the blue by mere praying (this concept is proven by Maebara Keiichi in Minagoroshi-hen), while Rika used to immaturely keep praying for miracles to come her way without taking action.”

Anyway, I hope you’ll enjoy these brilliant poems as much as I did!

I am who I am; Frederica Bernkastel. Furude Rika and Frederica are different. Shame on you if you thought so. My age? I’ve gotten bored with it, so I’ve quit counting.

She wasn’t discouraged nor did she cry at her fate.
She was beautiful.
She didn’t fawn anyone and fought them all by herself.
She was noble.
She shined brightly, like a divine figure.
I needed someone like her.

That’s because I’m gonna become much much more happy from now on.
I’m not gonna compromise with just this.
We are gonna take back all of our happiness that we lost.
For me, that’s about a hundred year’s worth.
For you, a thousand year’s worth.