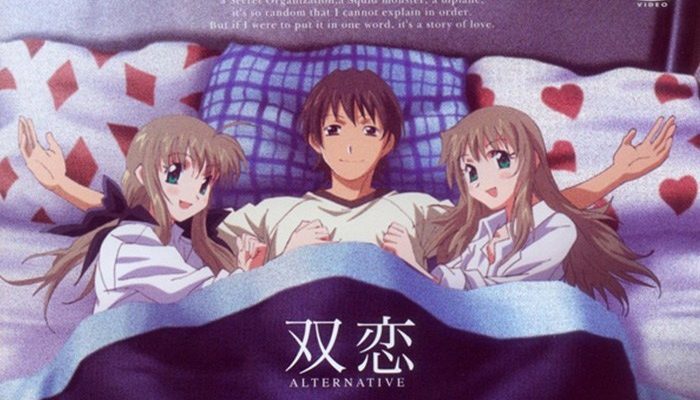 
Futakoi Alternative (Twin Love: Alternative), is a spin-off of the romanctic series Futakoi in which it loosely followed the concept of the original while having completely different (and older) characters, plot setting, timeline, etc. I was able to come across this anime by looking up the past works of my uber-favorite production house Ufotable (Kara No Kyoukai: Garden of Sinners, Fate/Zero), and I’m glad I did. Here’s the gist!

Plot: In a little town where the residents are mostly twins, possibly due to the people’s belief over the town’s Futagotamagawa (Twin Soul) River, works a 21-year old private detective that goes by the name of Rentarou Futaba. He is more known by the townspeople as Nidaime (2nd generation) because of his late father’s reputation of being helpful and friendly to everyone, and he is now living up to that expectation.

He has two assistants: the twins Sara and Souju Shiragane: similar in appearance, but complete opposites in personality. With the three of them comprising the detective agency, they help the people with their common everyday problems, handled in quite the most unique and comic ways possible. As the story progresses, you’d feel to be part of the town more since most scenes would casually focus on the bonds between the characters and how they go about life together in that crazy little neighborhood of theirs.

If you’re gonna watch the first episode, just ignore the first part where two loli-twins battle it out with a giant squid. It’s totally irrelevant at this point in the story. Carrying on, it seems that Rentarou would get himself wanted dead by the town’s Yakuza. His friend, the Yakuza’s 2nd top man, gave Retnarou their master’s parrot in order to escape the responsibility of taking care of it but they soon found out that his cat devoured the poor thing.

In a weird series of events, Rentarou finds himself participating in a professional boxing match ready to fight the defending champion. It turns out his punishment was to die in the ring while the thugs make money from the show via tickets and gambling.

The boss of the Yakuza gives him a very important advice: Meanwhile, his two assistants are around town helping their clients solve their dire predicaments that require immediate action. That said, if can just imagine how things went in the first episode- it’s pretty fast-paced and full of action! Crazy antics with guns, rocket launchers, flying motorbikes, helicopter explosions, crumbling buildings and delicious croquettes all chop-sueyed together!

Despite the mundane-ness of their daily lives shown in the initial episodes, the story, later on, will transition to a more serious tone by revealing the dark past of the Shiragane twins and how they came to meet Rentarou. It seems that they still have a problem that stems from their past, and they now need to make ends meet even when the whole world is against them.

“The criticisms about the show is normally the same as its accolades: namely, that it never settles completely into any one genre or style and switches between them from episode to episode (being almost equal parts romance, action, fantasy and comedy). However, it is a love story at its core.”