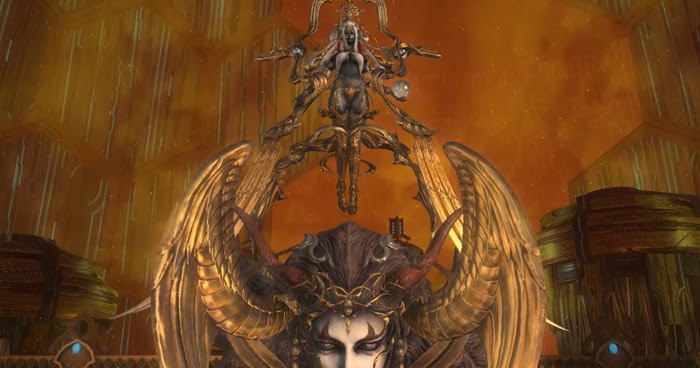 Hello everyone, and welcome to my guide on clearing Sophia (Extreme)!

Now let’s get down with the skills and rotation she uses:

Daughter’s Head (Push)
-Close gap between you and the head as tight as you can. Make sure you’re face to face

4 Shadows
-Sophia uses 1st skill (Thunder 2 or Thunder 3) which tethered Shadow/s will use on ‘Execute’ later
-Sophia uses 2nd skill (Aero 2 or Aero 3) which the other tethered Shadows will use on ‘Execute’
–Execute: All 4 shadows will simultaneously use the skills they are assigned with. Safe spot is on the Shadow/s who will use Thunder (1st set), and safe spot depends on what Thunder is used
–Note: Later on the Daughter Head will be facing and attacking on one of the Thunder ‘safe spots’, so make sure to look first and determine where that one safe spot will be before running

Tankbuster
-More like tank-killer so use cooldowns on this! It also gives the target a Thunder Vulnerability debuff so Off Tank must provoke while it’s being cast (no cast indicator so look at animation). The idea here is Off Tank must get aggro before Sophia kills the Main Tank with the next auto-attack paired with the debuff. This is skippable if DPS is good enough

Second Demiurge
-Can Heal
-Watch out for confuse of Divine Spark! Look away when you see an eye above this add

Third Demiurge
-Tank to edge to bait the ice puddles
-When it starts casting Gnostic Rant (AoE on front and flanks), move behind him

First Demiurge
-Watch out for Kenoma! Don’t attack when you see a sword on his buffs list: you’ll be eating high damage + knockback (and most probably fall) if you do

Strategy: When adds phase starts you will be given a limit of one minute to kill everything (DPS check) or else everyone will be zombified. Main Tank gets First Demiurge (PLD) anywhere, Off Tank gets Second (DRG) and places it on edge, and the rest DPS the healer. Kill order would be Second, Third and First

ULTIMATE ATTACK: Scales of Wisdom
-The floor will drop west so move to the east. Then it will drop east so adjust to the west after. Just make sure you won’t be sliding to any ice puddles lest you’ll be killed. After the east drops, high damage will be dealt to everyone so shield and heal as necessary

Quasar (Proximity Meteors)
-After ultimate, everyone stays on one edge, usually on the north side, to bait the proximity AoEs. Once the AoEs appear, move to the opposite side (south) to minimize damage

Quasar (Tilt)
-Watch out for tethers on each side. When they disappear, look on the edges and count the meteors on each side to know where the floor will tilt. The more the meteors, the heavier, so that’s where the floor will drop
-The safe side will always be the side with the lesser meteors
-But there’s a catch: red meteors = 1 point, blue meteors = 3 points. Do the math
-Example: If left side has 1 blue and 1 red, right side has 3 red, safe spot is right side
-Severity of tilt depends on the weight difference of each sides. 1 difference = slight tilt, 2 difference = heavy tilt so make sure you’re at the very edge of the arena

Black & White
-Tanks and healers will be marked as black, DPS as white
-Black and white must pair together before detonation, no more, no less, no same color
-We usually have the ff. macro and positioning:
——-MT D1——-
H1 D2 Boss H2 D3
——-OT D4——-

Cintamani
-Consecutive lightning-based raid-wide AoEs
-x2 on the first time around, x3 on the consecutive casts later on

So that pretty much explains all the skills she’ll be using – the only problem would be handling them simultaneously, swiftly and accordingly as a party. It’s good to know her skills, but much practice is needed.

Here we go for her rotation!

-For this phase’s 4 Shadows, stay in the middle and wait for the Daughter Head to appear first to see where it will attack, so you will see which safe spot to go to

-2nd Black and White is followed by Daughter Head (Push) so act fast!
-3rd Black and White is followed by Quasar (Tilt) so act fast!
-This phase’s 4 Shadows may look a handful, but it’s actually easy to handle. After Sophia uses her 2 tethered skills, determine the non-safe side and go there to bait the Quasar (Proximity Meteors), then run to the safe side immediately to handle Black & White, and then move a bit to make sure you’ll be safe when Execute drops. Save Healer Limit Break 3 if you’re not confident on making it through