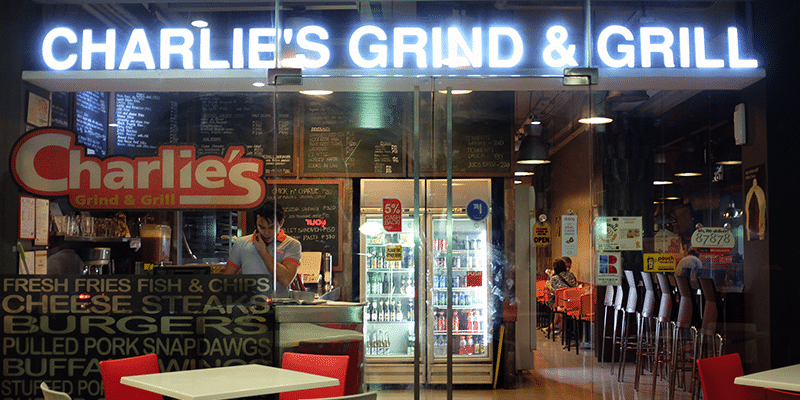 Ah, Charlie’s Grind & Grill- that name really brings in the feels and nostalgia. After all, it’s one of the first joints that made me realize that there are more amazing foodie places out there than just the famous restaurant chains you see everyday. My buds and I used to frequent their Kapitolyo branch in the mid-2000’s when I was in high school and college. We called it ‘Gluttonight!’ where we pig out somewhere with awesome food. Fast forward to today, I’m now here to bring you a detailed review on their 1-year-old branch at Diliman! Why Charlie? Their name is actually based off of Charlie Nagreen, the inventor of the hamburger as credited by the Seymour Community Historical Society in America. Nagreen was 15 when he reportedly made sandwiches out of meatballs that he was selling at the 1885 Seymour Fair to make it easier for customers to eat while walking. It is said that that he named the hamburger after the Hamburg steak where local German immigrants were familiar with.

Imbued with the American spirit and its people’s knack for a belly-filling meal, Charlie’s Grind & Grill takes on the western cuisine to better heights with their premium signature dishes.

Despite being a bit more pricey than your usual order of fries, theirs are definitely one my favorites as they can be quite creative. The three featured here are all of fresh Igorota Idaho potatoes although they also have sweet potato variants. The Black Truffle Fries are tossed in truffle oil and truffle salt, topped with grilled chicken liver. The House Fries sports some bacon bits, paprika, chili flakes, dill, and topped with sour cream and cheese sauce. The Chili and Cheese Fries on the other hand has diced onions, topped with cheese sauce and chili con carne. You don’t see these incarnations of fries often and they’re sinfully yummy. They mainly have two types of burgers: the Black Angus and Wagyu, and each has six variants you can choose from depending on your budget. Wagyu is more expensive by a few pesos.

Their description of Black Angus goes as “choice and select USDA Black Angus beef and grain-fed” while the Wagyu is “Kitayama Wagyu with no antibiotics or added growth hormones, made from vegetarian-fed cows and raised in a family-owned ranch”. Both are wet aged for 15 days, freshly grounded daily and are cooked medium well.

First in line is the basic Cheese Burger, followed by the Bacon Cheese Burger, Double Cheese Burger, Cheese Burger with Shrooms, Gorgonzola Cheese Burger and the Beer Cheese Burger. You can have them with either Black Angus or Wagyu beef burger patties. They’re pretty self-explanatory, except for a few terms: Gorgonzola is Italian Blue Cheese made from unskimmed cow’s milk. The Beer variant contains grilled mushroom, bacon, baked onions, cheddar cheese, mayo and beer BBQ sauce on a toasted beer bun. Lastly, the Shrooms variant adds a big breaded Portobello Mushroom stuffed with cheese in the mix.

Although priced a bit steep, the last three variants are the must-tries (P325-P445). To be fair, there isn’t any other burger joint that offers burgers with Gorgonzola, beer BBQ sauce or Portobello Mushroom as far as I know of. In addition to their rarity, the ingredients used are also expensive so the price is justified.

The wings are as they are named. They only have two kinds of spicy wings though- Hot and Nuclear. But the variety of other flavors make up for it. The Hot wings aren’t that spicy actually though they have a more tangy and soury taste (just as buffalo wings should). The Garlic Parmesan Wings are a bit salty but the cheese and dip balances the overall taste well. My favorite goes to the Reverse Wings: the sauce and dip are literally interchanged, meaning the dip is now on the wings and the sauce is now on the dip. Pretty rad.

Other things we were able to try on their menu was the Sloppy Joe (can be Angus or Wagyu). And they weren’t kidding on the sloppy part! If you’re going to order this, then get ready to stuff your face with a messy mouthful of cheddar cheese, fried egg, slices of jalapeno, onions and a butt load of sour cream and chili con carne! It’s relatively cheap too despite it being a big order. Next is their Charlie’s Chicago Dog that is made up of of pickled relish diced onions, spear pickles, sliced tomatoes, celery salt, and their signature Snap Dawg all cozied up in a bun with mustard. Yep, pretty standard setup. Lastly, their Meatballs on Pasta is also good. But rather than your main meal, I recommend it to be a for-sharing side dish to your main burgers.

Charlie’s Grind & Grill is located along Sgt. Esguerra in Quezon City. Nearby landmarks include ABS-CBN, GMA and the Kamuning and Quezon Ave. stations of the MRT3. And as I mentioned earlier, they also have a branch in Kapitolyo, Pasig near Shaw Boulevard. The branch in Sgt. Esguerra has limited seats but is cozy nonetheless. Staff are also attentive and hospitable. Overall, I recommend you visiting here for their premium burgers and wings if your budget allows.