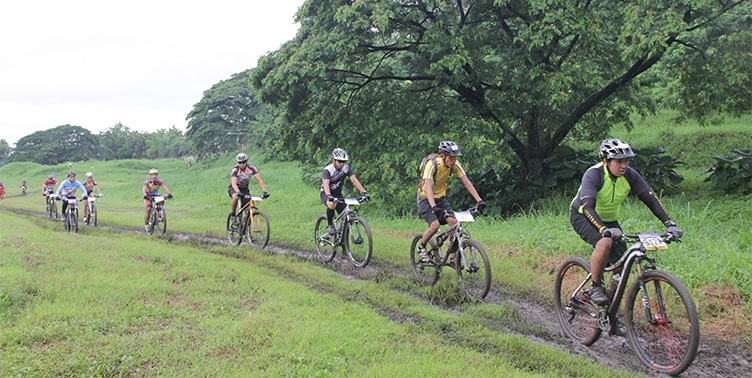 Weeks after treading the bike trails of Nuvali, we pedaled our way to Camp Aguinaldo Bike Trail! Situated at the heart of AFP’s headquarters (Armed Forces of the Philippines), it’s quite one of the most must-experience destinations of both trail enthusiasts and avid mountain bikers alike.

Friendly reminder: bike early and bring lots of water to drink to avoid dehydration and severe exhaustion. Regular bikers would already know this, but our tenaciousness didn’t stop us from breaking the former rule. And the price we paid after doing that? Biking from 10am to 12nn with uncomfortable climate temperatures ranging from 37°C to a heatstroke-causing 42°C! It was literally scorched earth.

Dave and I biked from Antipolo to Camp Aguinaldo (40 minutes). We met up with Joal and Dennis at the site. To go there, take the gate 6 entrance of the camp (the one in Boni Serrano Ave, the intersecting road that connects EDSA and Katipunan) and go straight ahead until you see a dead end gate. That would be the trail’s entrance. Upon entering the gate, you’ll see a lobby area to your right where you can hang your bikes or simply prep up- a fee of P50 is in order. This is also where the Guardian of the Bike Trail hangs out at certain time slots. That’s just the name we called him as not only does he have ice cold Gatorade for sale, but he also provides free use of first-aid kits whenever someone gets injured along the trail! He’ll also tell stories and tips about biking and whatnots- sounds like a keeper of a locality or dungeon in a game, right? Lol.

After a warm-up in the paved asphalts of Camp Aguinaldo, we began our journey to the trail:

It wasn’t quite like what we’ve experienced in Nuvali, but it definitely had its own difficult ups and downs. I mean haphazard erratic variations of uphills, downhills, sharp turns and obstructing obstacles such as huge rocks, tree trunks and uneven levels of ground soil. It practiced me to control my footing and pedaling position.

Empty freight container along the trail

Two rounds of the trail rendered all four of us tired, but I got really curious what would happen if we timed the whole thing. So I set out for one last round at the trail with David as my medical support- Dennis and Joal stayed at the lobby area to rest and time trial us. I was able to finish the trail in 12 minutes and 4 seconds, which I think could be a whole lot less if we were in tip-top shape. Me being fatigued in the third try already held me back due to a few bumps, stops and mini-accidents here and there. It was when I realized how more prone to accidents you become the more tired you are- your thinking and reaction time gets significantly slower. After that tiring yet fun exercise, we did a few rounds on the road and then pigged out at the Soldier’s Mall with full-on rice meals of dinakdakan and sisig, as well as loads of ice-cold Gatorade and melon juice. Oh, paradise! We rested for a while, then David and I headed back to our homes in Antipolo to rest and get ready for Triza’s birthday celebration later that night. A hard-earned nap was in order.