Biking Up the Wall of Timberland 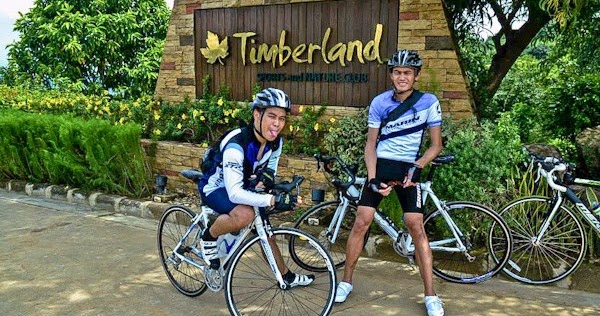 We finally mustered up the guts to pedal our way to the famous Timberland, a biker’s destination located in San Mateo, Rizal. Usually, we’d just bike around the city or anywhere nearby like in Antipolo, Marikina or Quezon City, but I guess we’ve had enough practice already to go to farther and more difficult places. Or so we thought.

We met at Josh’s place around 6:30am at SSS Village, Marikina, and made our way to J.P. Rizal which leads to San Mateo. I can’t remember clearly, but we just took a right turn along said road that has a big Timberland ad on it. There we entered the lower Timberland area that immediately fed us its infamous “The Wall“: a 50-degree uphill inclination full of steep blind curves spanning over 5 kilometers. I guess it’s called ‘The Wall’ for a reason. And that reason stuck to us pretty well. Every kilometer or a half, we’d stop and rest for a bit, trying to mend our exhausted legs and aggravated souls- much to the point that we’d just crawl our way up. It’s embarrassing to the other bikers who are trying their hardest, so we tried too, to little avail. We probably needed more practice lol.

Good thing that there are sari-sari stores all over the area offering cold hard drinks and quick snacks, be it in every kilometer or so. The torture climb lasted for about two hours.

Upon arriving at Timberland proper, we were asked to surrender a valid ID as well as sign waver forms.

I really thought that was the last uphill straw and everything would be rainbows and butterflies by then, but I was wrong. Another set of uphill climbs, be it much easier than The Wall, welcomed us with open arms, and we had no other choice but to conquer it.

At the end of the road lies an overlooking view fit for the those who have conquered this ungodly ascent. Of course we had to take pictures. The end of the road also connects to the feared bike trails of Timberland, which I did not dare enter as I was already exhausted at the time. . Maybe next time, when we’ll revisit the place with four wheels on the initial ascent. After our victory rest, we rode downhill on full yet safe speed back to the gates, and had lunch at Marc’s View Deck and Cycling Station. There we had the usual Tapsilog, Longsilog, etc. for only 60 PHP a dish! We readied ourselves for the descent via hybrid-hydration with Cobra and Gatorade.

The hardest part was the ascent, but the scariest was the descent. Just think that you’d be riding your bikes downhill on a road inclined 50-degrees infested with sharp curves and unrestricted cliffs that can lead to your death. Even my disc-brakes had a hard time making a full-stop. My hands were always pulling the brakes half-way yet it always felt I’m still going full-speed. I was happy, scared and excited all at the same time- surprisingly, the descent only took about ten minutes.