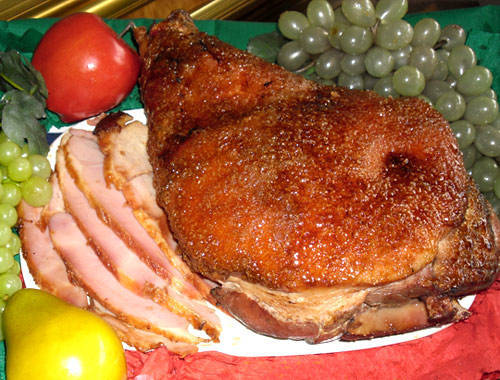 ‘Tis the season to be jolly now that Christmas and New Year is at hand! And for Catholic Filipinos, who by the way represent a whopping 83% of the country’s population, the norm encourages they take part in various traditions to bring everyone together as a family. One such tradition is serving that oh-so-yummy Christmas Ham in the span of the holidays, especially on Christmas Eve and the New Year.

It then begs the question: what’s the most sought after ham in Metro Manila? If you ask its residents, no doubt you’ll be hearing the names Majestic in Greenhills, King Sue in Caloocan, Adelina’s in Mandaluyong, and of course, the star of this article: the famous Excelente Ham in Quiapo!

Coming from Antipolo, I took a jeep to LRT2 Santolan Station, and traveled all the way to Recto Station. From there, I just walked my way to Palanca street via Evangelista street.

Buying ham at Excelente days before Christmas has been a habit of mine on the holidays, but lately I’ve noticed it’s getting harder to buy at the store due to more and more people storming the place. This year wasn’t any better- the place was already swarming with people half an hour before they opened at 8am.

Line for their pre-sliced ham variants and scraps Line for their bone-in ham variants

Take note: they have separate lines for pre-sliced ham and bone-in ham so watch out where you fall in line. I was aiming to buy the latter but the line there was worse, not to mention the process takes longer vs. if you buy the pre-sliced variants. I guess you could call it…a total hampocalypse that morning! ????

We’ve all been praises for Excelente, but how do theirs taste like? Its quality? Ham usually blends a taste of both sweet and salty, but the traditional kind leans more on the sweeter side. Chinese ham, on the other hand, is known for being more salty than sweet. Excelente Ham recipe hits that gastronomic bullseye- pair that quality with fresh thin-sliced softness and a melts-in-your-mouth factor, and you have masterpiece!

I went on ahead and bought a kilo and a half of their equally good Chinese Ham Sliced. I also bought a kilo for my friend Joal. Here’s a photo he took as he prepped a serving:

For their Chinese Ham Sliced, you can choose if you want the syrup separated or not, with the latter having an additional price. They also have other cheaper ham variants, but they still taste good nonetheless.

Here’s their ham pricelist as of December 2016:

After you get your order wrapped in plastic by the server, you’re given a receipt and will be instructed to go to the other side of the shop to have your ham secured in their signature red box, and then put to a plastic bag for easy carrying. Once home, you can either refrigerate or freeze the ham until it’s time to eat it.

To prepare, it’s as easy as 1, 2, 3: thaw it, put it on the microwave for a good 30 seconds, and voila! It’s so good you can eat it on its own. Or better yet, pair it with the traditional Queso de Bola, bread and some wine!