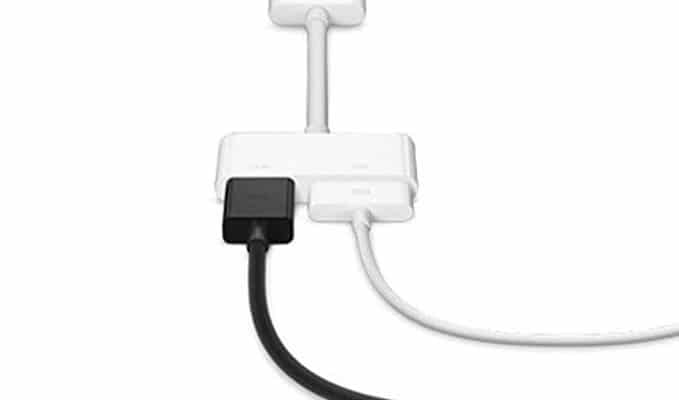 One thing I hated about the Apple iPad is that it doesn’t have any kind of video output. I finally was able to solve that problem thanks to China gadgets to the rescue, which is CD-R King’s iPad HDMI Adapter. Well, Apple has its own version, but of course it would be expensive.

This costs 1,480 PHP, and the official Apple version is around 2,500 PHP. What’s good about this one, despite it being a replica, is that it doesn’t have a connecting cable. With that you won’t have to deal with the risk of breaking the cable and making the said accessory completely useless. Oh, how many times has it happened already to me with my Apple USB cables? Lol. This one’s just a piece of plastic you poke into your Apple gadget, then poke a standard-sized HDMI cable in it, and voila! The bad thing about it is that the accessory doesn’t completely lock to the iPad so it’s pretty sensitive to movement. When using, just put yourself and your gadget in a good position to make sure the HDMI converter won’t come off. It’s so light that it seems that it will, no, it definitely will break if you throw it against the wall so be careful.

It’s HDMI so it also transports audio data. And the accessory has a USB port beside the HDMI out so you can charge or sync to your computer at the same time. Neat, huh?

By the way, this works not just on the iPad, but to the iTouch and iPhone as well. iPad 3, iTouch 4, iPhone 4S and below, to be exact. It’s plug and play so there’s no need to install drivers, software or anything. And of course it won’t work on the new ones that have the all-new Lightning connectors.

If you’re interested in buying, better call their Stock Inquiry Hotline that can be found at their website here to check which branch nearest you has stocks. I was able to get mine at Sta. Lucia East Grand Mall in Cainta.